In 1968, Lyndon Banes Johnson was president. Martin Luther King had been assassinated. Riots had broken out across America.

The 1960s were a tumultuous time in America and culminated in the National Advisory Commission on Civil Disorders.

It was better known at the time as the Kerner Commission and it was appointed by Johnson to determine the root causes of the rioting.

The report came in the wake of the infamous 1967 riots that saw 43 killed in Detroit, 26 in Newark and 23 elsewhere in the country.

It concluded that the riots were primarily the function of poverty which, in turn, was a consequence of racism and the lack of economic opportunity.

The Kerner Commission report was influential and formed the basis of legislation, programs and spending which sought to ameliorate the plight of blacks.

Here we are more than 50 years later and we are once again witnessing widespread rioting.

Remarkably, the unemployment rate for blacks went from 6.7 per cent in 1968 to 8.4 per cent went Barack Obama left office.

Household incomes for black families increased by more than 42 per cent during that period.

Thirty-five per cent of black households lived in poverty in 1968 while today it is about 22 per cent.

In 1968, only 50 per cent of blacks had completed high school. Today that figure is more than 90 per cent.

Blacks are also twice as likely to have a college degree today as they were in 1968.

Black workers still earn less than white workers (about 82 per cent) and blacks are twice as likely to live in poverty as whites.

And finally the rate at which blacks find themselves in prison or jail has almost tripled since 1968 and is currently six times the white incarceration rate.

This fitful progress has occurred while blacks have assumed political leadership positions in major cities. There are now more black mayors, city councilors, police chiefs than at any time in history.

With all this political power, how is it that blacks have yet to benefit from all that America has to offer?

It’s not all that complicated to answer. America has been in the process of de-industrializing for decades now and exporting jobs to China and other Asia countries. At the same time, the United States has been importing millions of low skilled workers. That coupled with inflationary policies have wreaked havoc on everyone.

All this transpired under liberal leadership, under the stweardship of politicians who espoused fine sentiments, but who enacted policies that thwarted national ambitions and economic development at home.

That was all starting to change. In the past few years, black unemployment was falling precipitously as was white unemployment. The American economy was growing by leaps and bounds. 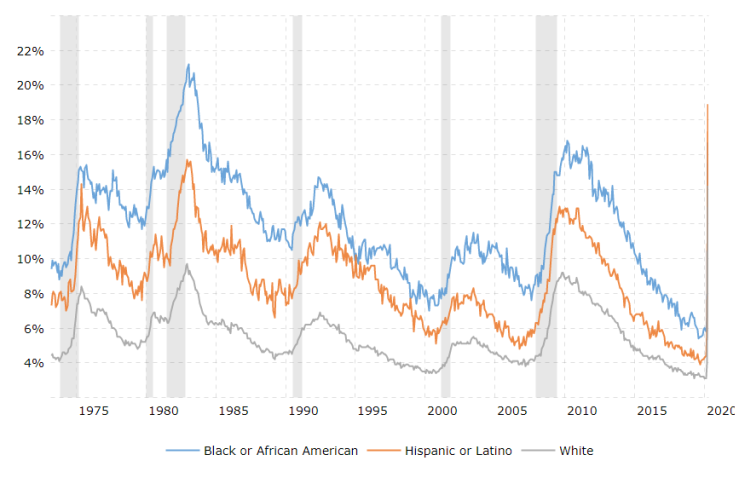 Then the COVID19 pandemic hit and it all came to an end. Hardest hit were blacks.

Of course, there are those who will argue the riots are about George Floyd who died while being arrested.

That was the spark. The tinder was the economic collapse.

Fanning the flames are the Left and Democrats who are fearful of losing their traditional black support.

Drop me a tip if you enjoy my work. There’s also a handy pay button below.

This site uses Akismet to reduce spam. Learn how your comment data is processed.