Those of us who have spent our lives toiling in the private sector can’t help but chuckle at the reaction President-elect Donald Trump’s tweets have garnered.

When Trump tweets, headlines are made and pundits appear shocked.

What did they expect?

The president-elect built his campaign on social media, after all. His tweets were legendary – Lying Ted, Crooked Hillary, Low-energy Jeb.  They were bullets fired with precision.

Now, the staccato of tweets was not to everyone’s liking, but it isn’t unusual in the business world.

It’s called keeping everyone on their toes.

In Trump’s case, I really get the feeling he’s looking at the presidency as CEO of America Inc.

If the president-elect sees or hears about something he doesn’t like, he makes it know. 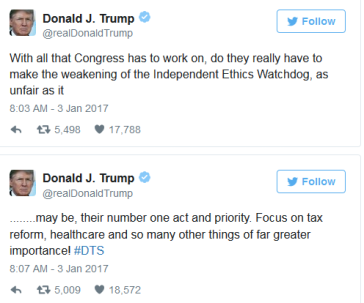 Congress, for example, was going to weaken the Independent Ethics Watchdog.  Trump thought Congress’ time could be better spent. So he tweeted.

Guess what? After the tweets, the planned changes were dropped.

This is what managers do. They get their employees to focus on the task at hand. They set priorities. They set goals. They determine how they will be achieved. They monitor the progress being made.

This is a very hands-on approach and I suspect this will be the hallmark of Trump’s presidency.

Good. It’s a refreshing change of management style. It ensures accountability. It signals goals will be set and, more important, met.

In business, managers live or die by how they get the job done.

In politics, political leaders seems to care more about feelings.