In a few short days, Albertans will begin the feel the effects of the Notley government’s carbon tax.

Gasoline prices will be the first thing to rise. The tax will see regular gasoline jump by 4.9 cents per liter. 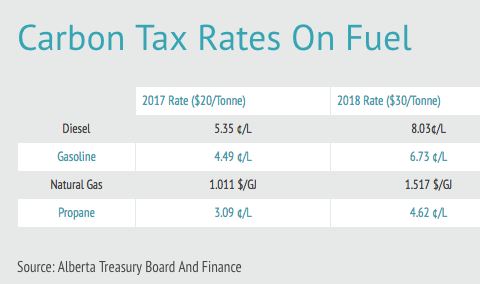 With the increase in gasoline prices, of course, everything else we buy and produce will rise as well – food, clothing and anything that needs to be transported (which is everything).

It will cost more to heat your home and cook your food as natural gas prices will rise as well.

Farmers, too, will be paying more for fertilizer (you need natural gas to make nitrogen) and so food prices will jump over and above transportation costs.

Let’s not forget greenhouse operators who actually pump in extra CO2 to help plants grow. Their cost of operations will increase with the new carbon tax.

All in all, it is estimated that the carbon tax will cost the average household about $600 a year.

That’s probably on the low side. I’m expecting to see costs double that. We’ll see who was right in a year’s time.

The problem is that it will add costs to doing business in the province one way or the other.

Now, the government has reduced some other taxes, but Notley’s crew doesn’t seem to understand that attracting investment depends on all things being equal. With the carbon tax, all things are not equal.

Why should a business invest in Alberta when it can just as easily invest elsewhere in another jurisdiction that doesn’t have a carbon tax?

The United States, for example, isn’t going to have a carbon tax and President-elect Donald Trump is committed to reviving energy investment.

The worst part of all this, of course, is that it’s all pain for no gain. Even if we manage to reduce CO2 emissions, it just won’t matter in the giant scheme of things. Our emissions will have no impact on total global emissions. There’s no getting around that.

The provincial government argues that the tax is just a part of an overall climate change policy that’s designed to diversify the economy through the development of renewable energy.

That’s not very likely. Investment in renewable energy will last only as long as subsidies are available. When the subsidies run out (and they will), the investment dries up. That’s been the example all across Europe.

In the end, Albertans will have nothing to show for their pain except less economic growth and higher energy prices. It is the very definition of stupidity.